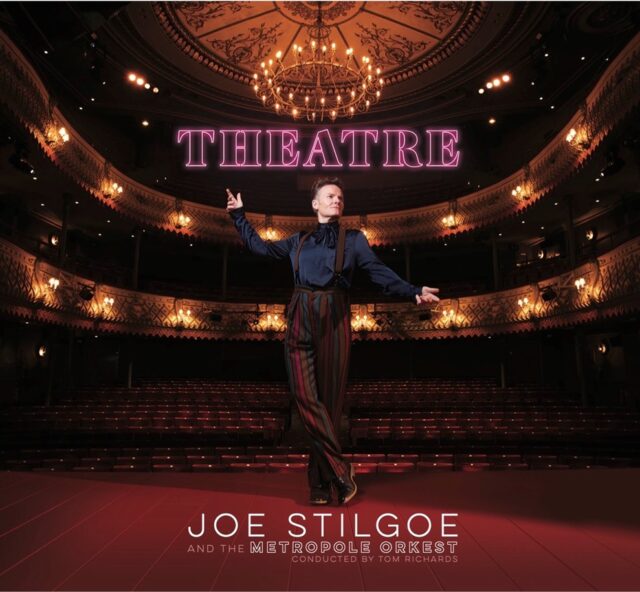 Brought up in a theatrical family, this album is Joe’s love letter to the theatre. At a time when theatres are only just getting back to (show)business each song has been chosen or written with the aim of transporting the listener straight into that hushed auditorium, ready to be absolutely steamrollered by the mixture of emotions experienced as the lights go down and the curtain goes up.

“TAKE ME BACK TO THE THEATRE”

Says Joe: ‘I perform in theatres, I write music for theatres, I love being in theatres and I love seeing things in theatres. In the last two years, the thing I have missed most is theatre. My first job when I am on stage is to entertain. That’s what I love doing. I love being a musician at the same time, but making people laugh and cry and become part of what’s happening on stage is, I’ve realised, the whole reason for me being up there.  I wanted to share that taste of theatre, that joy of theatres through this new album.’

This is Joe’s ninth studio album and continues Joe’s genius for taking great songs from the past and giving them an exciting and relevant new spin that makes them sound as if they were just written. Theatre turns the spotlight on some of the greatest songwriters past and present from Kander & Ebb, Kurt Weil and Stephen Sondheim to Pasek & Paul.

‘When I started searching for songs for this album I really focused on the lyrics. With Cabaret the first line “What good is sitting alone in your room? Come hear the music play…” is so well known but yet still managed to grab me, and I thought, this has such relevance coming out of the pandemic and where we are now. It’s incredible how some older songs seem to capture a current mood or a moment. So with the help of my producers Steve and Tom, we’ve taken Cabaret in every direction our brains could think of, bringing to mind cabaret, theatre, madness, ecstasy and debauchery (much like a Downing Street party). We gave it a new piano concerto/ big band direction – Gershwin and Bernstein fighting with Kander and Ebb,’ says Joe.

Joe also shows his ever-evolving brilliance as a songwriter, a skill that has now taken him into the world of musicals and theatrical songwriting. During the lockdown he composed a musical for Chichester Festival Theatre to add to his already impressive body of work. Having only started writing for theatre in 2017 (The Jungle Book) Joe has now written 5 musicals (including the touring family shows Zog and Zog & The Flying Doctors), and he has just been commissioned to write a new musical with Jason Manford for the Bolton Octagon, in which they also both star. He has written three new songs for Theatre as well as the triumphant overture Theatreland (orchestrated by John Wilson’s former arranger Andrew Cottee) – these include Mr Matcham, a musical tribute to the prolific theatre architect Frank Matcham.

“IT MEANS THAT MUCH TO BE FRANK”

‘Whenever I play a theatre I take a moment to take in the architecture – the opulence and otherworldliness that transports you away from your everyday life. Frank Matcham’s designs were and are still today part of the magic of theatre. We’ve missed the theatres themselves as much as the entertainment that goes on inside them over the last two years. With the help of the wonderful Simon Callow, we pay tribute to the greatest theatre designer there ever was with a pop odyssey detailing his genius.’

Other new songs include Take Me Back (To The Theatre) and Bring Down The Curtain, which celebrate the fact that despite everything that’s gone on – and is going on- the theatre will still be there bringing people together and creating escapism and joy for so many, as the lyrics say:

’You can bring down the curtain

But don’t stop the show.’

Simon Callow is not the only theatrical guest on Joe’s album. Joe is joined on the album by a star- studded theatrical line -up of special guests: Anna-Jane Casey, Louise Dearman, recent Olivier-nominee Omari Douglas, Hadley Fraser, Le Gateau Chocolat, Jason Manford, Trevor Dion Nicholas, Jamie Parker and  Rebecca Trehearn. Tom Richards conducts and also appears as a guest playing soprano saxophone on the beautiful Lost In The Stars. Tom’s regular gigs including playing in Tim Minchin and Jamie Cullum’s bands, but as an arranger his star is really on the rise, with recent work including the new Michael Buble album.

The orchestrations are one of the real stars of the show on this album – Joe has worked not only with Tom Richards but also Callum Au, fresh from work on the Cats film, Evan Jolly – a noted film and TV composer, and the aforementioned Andrew Cottee. This quartet are the best in the country and in their own ways they bring so much class, humour, musical ideas, soul and emotion to the music.

To make the arrangements sound as glorious as possible, Joe and Tom both chose to work with an orchestra that many consider the finest in the world for this style of music –  the incredible Metropole Orkest from the Netherlands, who have featured on records from artists including Laura Mvula, Gregory Porter and Jacob Collier. The sessions took place just before Christmas 2022 in Hilversum, the home of the orchestra, and the recording is bolstered by the choir of Capital Voices, directed by Annie Skates.

Theatre is produced by Steve Power and Tom Richards.

To celebrate the album release, Joe and the BBC Concert Orchestra will be performing at the Barbican in London on Monday 2nd May. Tickets are available at https://www.barbican.org.uk/whats-on/2022/event/joe-stilgoe-the-bbc-concert-orchestra

Joe is a true modern-day entertainer, known as a performer of wit, style and a level of musicianship that has seen him recognised as one of the best singer-pianists in the world. Joe’s originality lies in writing songs that feel like they’ve been around for years, and adapting classics that sound as though they were just written.

Joe has released 8 albums, 5 of which have topped the UK Jazz chart.  Joe works extensively on radio, including hosting and starring in BBC Radio 2’s Friday Night is Music Night  and being a regular guest on BBC Radio 3 and 4 and Jazz FM. Joe tours in the UK and internationally, and has performed with orchestras and bands including, The John Wilson Orchestra, Royal Philharmonic Orchestra, BBC Concert Orchestra, BBC Big Band and the Lahti Symphony.

On stage Joe has performed in High Society at The Old Vic and Guys And Dolls at The Royal Albert Hall. Joe’s TV appearances include performances at the Olivier Awards, in the BBC biopic Babs, and as host of BBC Young Jazz Musician of the Year. Joe’s natural ability to entertain and his musicality have led to him performing for The Queen and Duke of Edinburgh’s 70th Wedding Anniversary at Windsor, and private performances for Prince Charles at St James’s Palace and the Duchess of Cornwall at The Ritz in London.

For more information check out:  www.joestilgoe.com