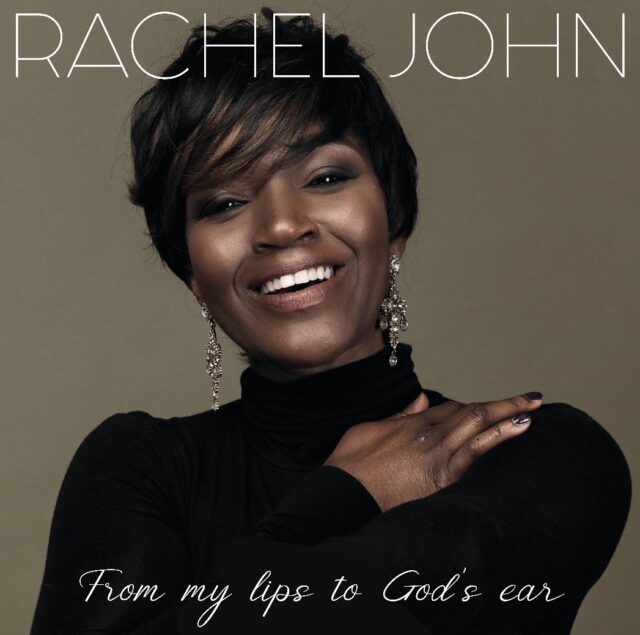 Rachel John shot to fame with her Olivier nominated role in smash hit musical
Hamilton. As one of the West End’s most versatile performers, she has been
appearing in successful productions for the last 17 years. She made her West End
debut in Disney’s The Lion King in 2005 and has gone on to play major roles in We
Will Rock You, Sister Act, Memphis, The Bodyguard and The Girl from The North
Country. But it was in December 2017 that she opened as Angelica Schuyler in the
original West End cast of Hamilton, a role for which she received critical acclaim
and was nominated for an Olivier Award.

Now Rachel has returned to one of her other musical passions, gospel and has
recorded a stunning gospel album, From My Lips to God’s Ear, performing songs
that she has listened to and sung herself throughout her life.
The Executive Producer of the album is renowned West End and Broadway
performer Ramin Karimloo who suggested to Rachel that his company, Mercy
Productions, could record a filmed concert at the NTA Church in Tooting in 2021.The
event was both filmed and recorded for this album. Karimloo is making the six film
episodes exclusively available every week from 11th March on his Fan.Direct site:
https://www.fan.direct/ramin/

Neil O’Brien, Managing Director of Westway Music, said: ‘I was introduced to Rachel
last year during lockdown by Ramin. When I watched the film and heard the music
and saw Rachel’s performance, I could hear a great album and we set about working
to make it something that would really do justice to the performances. The album has
been mixed by Tim Hamil under the guidance of our A&R Director Rhydian Roberts
and we believe we are releasing a stunning debut performance that demonstrates
just why Rachel John is one of the leading vocalists of her generation and someone
we know will shine brightly in the future.’
A single of lead track, Blessed Assurance, will be released digitally on 18th March.
The album track-listing and Rachel’s personal notes on each song are here:

1. Blessed Assurance (This Is My Story)
This song emphases the safety, surety and confidence I have in being loved and
held by God. The hymn was written in 1878 by blind American poet, lyricist and
composer, Fanny Crosby, who penned over 8,000 hymns.

2. I’ve Found A Friend in Jesus (Lily Of The Valley)
This song expresses the friendship, comfort and support found in Jesus. It lists all
the hardships you can face in life, but I am reassured that I have a friend and can
face these situations with peace in my heart.

3. And Can It Be? (Amazing Love)
This song is a rhetorical question. It is a feeling of gratitude for being a recipient of a
love I do not deserve. Charles Wesley wrote over 6,500 hymns and this one was
penned because he marvelled at the Love he himself had received.

5. Have You Been To Jesus? (Are You Washed?) / There Is A Fountain
During the Easter period we sing these two songs and reflect on His crucifixion and
more specifically His blood. It is a strange paradox to some ears, but we celebrate
His beautiful sacrifice and our freedom.

6. I Will Sing The Wondrous Story
My voice and my singing is my ultimate gift to God. I love to use my voice to tell God
and the world how grateful I am that I know Him and that He loves me. I will keep
telling my ‘story’ forever, in this world and the next.

7. When I Survey The Wondrous Cross / I Stand Amazed (How Marvellous)
For me, When I Survey The Wondrous Cross sums up the Easter message. I can
see myself standing and looking at the cross and the lyrics paint the picture of both
sorrow and happiness.
I Stand Amazed is another hymn that allows me to gaze at the cross and think about
His amazing love. The song warms my heart.

9. Jesus Shall Lead Me (Where He Shall Lead Me) / I Will Guide Thee With
Mine Eye / Guide Me Oh Thou Great Jehovah
These three songs are about God’s guidance in daily life. I am asking for, and
reminding myself, that he is the one who is looking after my life, so I can rest under
his guidance.

www.westwaymusic.com
‘The Music of Theatre’
FB @westwaymusiclabel | IG @westway.music | Twitter @MusicWestway
Westway is a new music and film platform dedicated to the music of
theatre. Formed in 2020 it has so far released projects including
Samantha Barks, Ramin Karimloo, Lee Mead and Cassidy Janson.