New series of Westway Sessions announced for this summer.

New series of Westway Sessions announced for this summer. 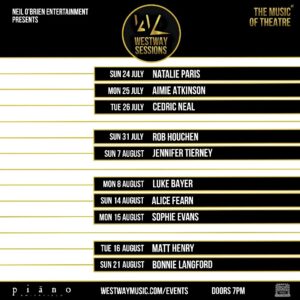 Natalie trained at The Italia Conti Academy of Theatre Arts as well as RADA and has numerous West End credits to her name. She was the original Jane Seymour in Six The Musical, where she was nominated for an Olivier and also features on the original cast recording which has received over 200,000,000 streams.

Also, part of SVN, a girl band made up of the Original West End queens of Six The Musical. They have their upcoming headline show at the O2 Islington on 7th August and will taking part in the first ever Musical Theatre Convention Musical Con in October.

Having originated the role of Katherine Howard in smash hit phenomenon ‘Six The Musical’ Aimie Atkinson was nominated for an Olivier Award for Best supporting Actress. Now currently starring in Pretty Woman the musical as lead Vivian Ward. Aimie has starred in varied productions and tours as well as playing Nikki Martin in BBC Doctors. Aimie is also the Winner of the prestigious BBC Radio 2 Voice of Musical Theatre award and the voice of Astana. Aimie’s debut album ‘Step Inside Love’ is available for download on all online music platforms.

Currently staring as Goldie Wilson in Back to the Future, Adelphi Theatre, Cedric Neal, was a Semi-finalist on the 2019 series of The Voice UK and made his West End debut as Berry Gordy in the original London cast of Motown – The Musical. Roles on Broadway followed, as well as both film and television. Cedric won a Helen Hayes Award for Outstanding Supporting Actor, Resident Musical in 2013 for his character as James “Thunder” Early.

After completing his studies at the Guildford School of Acting in musical theatre, Rob has had a successful and varied West End career.

Rob, who has had roles in Les Misérables, The Light in the Piazza, City of Angels and more, will present a plethora of tunes from both the worlds of musical theatre and pop, as well as his own original material, which can be found on all major streaming platforms.

Jennifer Tierney is a British actress and Mezzo-Soprano singer from Greater London. She returns to the set of musical Come From Away this season. Working in the industry for a decade now, Jennifer has amassed an impressive CV of West End and touring roles. On the 7th of August Jennifer will bring her stunning voice and engaging character to Piano Smithfield.

Luke Bayer is probably most well-known for appearing as Alternate Jamie in the original West End cast of Everybody’s Talking about Jamie (for which he won a Broadway World Award). He has appeared in numerous Musicals, most recently as Mark in the acclaimed revival of RENT at the Hope Mill Theatre in Manchester.

Born and raised in North Yorkshire Luke first came to the public’s attention in 2007 when he got through to judges’ houses. He is due to appear in the European Premiere of One Man Musical, DIVA: Live From Hell at the Turbine Theatre this Summer.

Alice Fearn, currently to be seen as Capt. Beverley Bass and others in the award-winning West End musical Come From Away, is bringing a show featuring the hits and the music of one of her greatest inspirations, Celine Dion. Following Celine’s music through the decades, featuring her most renowned duet partners and her biggest musical moments!

Having stamped herself as one of the West End’s leading ladies in recent years, Alice has starred in Les Miserables, Shrek The Musical, Dirty Rotten Scoundrels and famously as green witch Elphaba in Wicked.

Welsh singer and actress, Sophie Evans, came to prominence in 2010 when she was picked from over 10,000 hopefuls to appear on the hugely popular BBC series Over The Rainbow. After making it to the final at only 17, Sophie was named runner-up and subsequently chosen by Lord Andrew Lloyd-Webber to don the legendary ruby slippers and play the alternate Dorothy in selected performances of The Wizard of Oz at the London Palladium in 2011. Sophie has performed in concerts around the world for over ten years alongside performers such as Kerry Ellis, Michael Ball, Katherine Jenkins, Alfie Boe, Paul Potts, Russell Watson and more.

Award-winning West End actor, singer, songwriter, and artist: Matt Henry MBE is coming to Piano, Smithfield! Awarded an MBE in the Queens New Year’s Honors list 2017 for his work in Musical Theatre, Grammy nominated for his solo performance for the London KinkyBoots cast recording. Winner of The Laurence Olivier Award for Best Actor in a Musical for his performance as Lola in Kinky Boots and voted by London theatre goers as Best Actor in a Musical at the What’s On Stage awards. Currently performing in Olivier nominated show The Drifters Girl musical at the Garrick theatre Playing the role of ‘Clyde Mcphatter. Matt is also billed as one of the shows co-creators.

Bonnie Langford has packed a wealth of experience in her outstanding career which has embraced success in theatre, television, film and radio in both Britain and America.

Having made her theatre debut in the West End at the tender age of seven in Gone with the Wind at the Theatre Royal, Drury Lane, a multitude of roles in musical theatre, and on both the big and small screen followed.

Bonnie is currently playing the role of Evangeline Harcourt in Anything Goes (UK Tour).

Westway is a new music and film platform dedicated to the music of theatre. Formed in 2020 it has so far released projects including Samantha Barks, Ramin Karimloo, Lee Mead, Joe Stilgoe, Rachel John and Cassidy Janson.

Box Office Radio are once again the media partner for the Sessions.